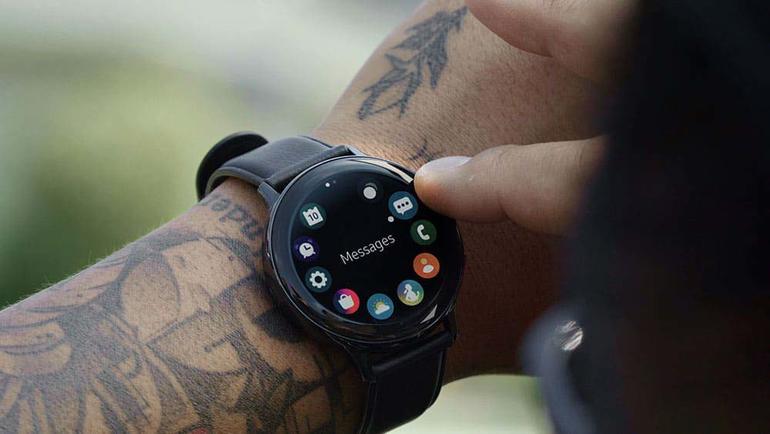 If you are looking at upgrading from the original Samsung Active Watch – Don’t do it. There just is not enough change or improvements between the two to justify the change – yet.

If you are looking for a durable, comfortable, feature rich wrist worn device that also tells time that is focused on keeping you healthy – decide if you want the 40mm or 44mm and then spend the money.

Our world of tech is full of different gadgets – some designed to improve functionality, others aiming to improve our lives but sometimes the best gadgets are those which are just down right fun, while doing those other things too.

While the first smart watch released back in 1998 -the Ruputer – pales in comparison to the smart watches of today, the device was attempting to solve the same problems. Communicate, have fun and of course – tell the time.

Fast forward to September of 2019 and the latest addition to the Samsung Galaxy Watch family is complete. This latest addition is not only focused on being active, as the name would imply, but also focuses on improving communication with a few fun touches as well.

While the Active2 release was just a short 5 to 7 months later, depending on your region, Samsung had reported significant differences between the models and emphasized a focus on using the watch as a tool to help you get healthier.

My Experience With The Samsung Galaxy Watch Active2

I have been wearing my Samsung Galaxy Watch Active2 for about 6 months and while I am overall very impressed, there are a few things that I am hopeful will be improved in the next version as well as additional features that are pending FDA approval.

Without speculation and taking into consideration only things that we can see as it is now – the watch performs as I would expect and want. It tells time, has access to apps and has provided an improvement to my day to day health. All good things.

When I get text messages or phone calls – it is great being able to look down and see a short blurp of what the message is about but it is also entirely frustrating when everything I want to do, beyond a 5 second glance, I think ‘I need to get my phone to do this’.

Zillow integrates very well to the point where a new house is available, I get an alert and an image of the house is displayed, price and just enough detail to make the decision of ignoring it or looking into it more. It also has a nice feature of ‘show on phone’ so that by the time I have reached my phone, the watch has unlocked it and displayed the link/image.

Some apps are not quite accurate and the health features don’t always work 100% as intended ( hike or run for 5-10 minutes before it is ‘detected’ ) but these things are also easily manageable and nice as a ‘safety net’ of sorts to keep things recorded.

If it is a deal breaker that an impromptu run doesn’t get picked up your first quarter mile – I got nothing for you. Moving on.

I purchased the 44mm in blue which under certain ( most ) circumstances appears to be more of a black with a slight blue hint with a black stock band.

The band is comfortable and durable while the clasping mechanism took a little getting used to. I have done yard work, office work, been active and relaxed and all the while – the watch has remained comfortable on my wrist.

Depending on how tight you wear your watch – the green light from the sensor may be a bit much. When going to bed and switching to nighttime mode ( which suppresses the screen display ), the green light would become very apparent – to the point I’ve used it to assist in navigating from the bed to the bathroom in the middle of the night.

Legitimately thought I broke it twice over the past few months – one time swinging my hand transitioning from opening one door and then another and ricocheting off the door knob and the second while hiking I slipped and my watch face went right into a rock.

In both events, while I thought for certain that it was done for, there has been zero damage to the screen.

Granted, the bezel is a little notched/dinged from the impacts ( or a number of other smaller ones ) but the screen itself has been rock solid even with my less than gentle day to day.

The AMOLED screen is bright, crisp and full of color – in and out of direct sunlight as long as you have the power dialed up.

As we said earlier, the screen is a Gorilla Glass DX Plus which translates to increased protection from scratches and cracks.

Lastly, the water resistance protection is rated IP68 or 5ATM which remains unchanged from the previous model.

The physical rotating bezel of the original Galaxy Watch was one of those features that everyone could not stop talking about and rightfully so. Between the functionality and the satisfying ‘click’ followed by the resistance response from the bezel itself – perceived performance was a plus.

When the Galaxy Watch Active was released – this feature was missing and I guarantee Samsung heard about it. Between social media posts and rants, it was easy to pick up that people missed the bezel.

Here comes the Active2 with a compromise. No physical bezel that can spin, but if you run your finger along the edge of the screen you are presented with the same control mechanism as before – albeit a fully electronic one.

A haptic feedback provides a sensation similar to a real dial ( kinda ) but it has been quite touchy on how I am able to control it. I generally find myself swiping side to side in order to transition screens.

If you are looking into the Samsung Galaxy Watch Active2, then I will assume that many of the health related applications and features will be very important to you.

This is a good thing because that is really where this watch excels – sure you can have maps or twitter notifications display but everything about this device screams ‘get active’.

No literally – if you have been sitting for too long, it will start to vibrate and will display a cartoon image telling you to get up and get moving. Sometimes this is followed up with a congratulatory message letting you know just how good of a human you are.

While being mindful of your activities may not sound like the most fun thing in the world – there is something exciting about looking at your watch and seeing you are just a few hundred steps away from your daily 10k step count.

While possible and ‘soon available’ – we will have to wait for the ECG for a bit longer.

United States FDA is currently preventing the manufacturer from enabling the features but as recent as August of 2020 there has been promise. In a Press Release from Samsung, South Korea has gotten the green light which favorable results.

If you are familiar with the Galaxy Watch family it will be no surprise to you that fitness tracking is a big deal with Samsung. You are able to track over 39 separate workouts with a detailed breakout of all the collected data from within the Samsung Health app.

Some of the competitors out there are able to provide similar or the same data that may be a little easier to digest. All the information is there but when comparing workout numbers with my wife, her fitbit is just a little easier to extract the key data points.

I would buy this watch again and I don’t think that I would be swayed by any of the other options on the market currently.

This watch is bulky enough for a larger wrist but not so large that a smaller wrist would not have an option that would fit well. The display is bright, durable and responsive while offering a wide range of applications with improved software and features that can be enabled once government approval has been confirmed.

The price is comparable with others in it’s sector and if compared to a standard wrist watch – again – fairly comparable with a quality device. This is not your $20 Walmart watch but it also is not a mortgage payment.

If your ultimate goal is to get a quality smart watch with a focus towards health – the Samsung Galaxy Active 2 is a hard option to pass up.