Pros: Smaller in size, voice commands picked up easier, able to connect to existing audio setup and about half the price of the 1st Generation

Shake Down: I like our Amazon Echo Dot and while we usually use it for playing music, getting the weather or settings ‘time out’ timers for the kids – especially for the price – I recommend the Amazon Echo Dot 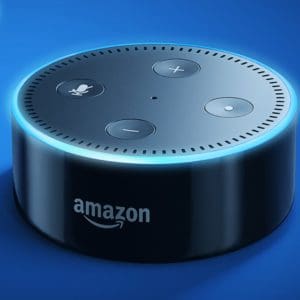 With more and more home automation and assistance products entering the market, competition has never been stiffer for which device would be the right device for your home. Apple has been working on a Siri-powered smart home speaker that includes built-in cameras, Google has entered the playing field with their google Home and of course Amazon has had Alexa in various different options in the wild for a while.

Amazon’s generation update to their famed Echo Dot comes with a number of different updates and improvements but most notably a price reduction of nearly 50%. One could speculate as to the ultimate reason for this but one of the most obvious reasons – get the virtual voice assistant into as many homes as possible before the market becomes flooded with a number of different options soon to be available.

The original Echo Dot launched last March as a followup option to the original Echo – both of the 2nd Generation options selling out much quicker than Amazon had anticipated all while giving consumers exactly what they had been asking for.

The ultimate purpose of the Echo and it’s various iterations was to give consumers a virtual assistant – a device that would integrate with their home and other devices while also performing tasks that would ultimately make the users life ‘easier’.

“Alexa” is Amazon’s Cloud-connected voice assistant that can be turned on by simply saying her name, Amazon or Echo. Once turned on the always listening device will reach out to the cloud to perform the task you ask of her.

These options include streaming music, podcasts, set timers, look up facts, set an alarm, tell jokes and she can even read off news headlines. to add to this list, Alexa picks up ‘skills’ or better explained as third-party voice apps that integrate with the device. Some of the current 3,000 ‘skills’ are Uber and Lyft for placing a ride, Capital One for paying a credit card payment, Dominos to order a pizza among a few ‘fun’ skills such as the Wayne Investigation which lets you talk your way through an interactive mystery. To top off this list, there is an increasing number of home gadgets that the Echo can also integrate with including lighting systems and thermostats. 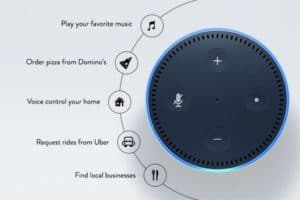 Like all pieces of technology – there is a little bit of a learning curve when getting initial setup completed. Both mobile devices used to connect with the Echo were Android but the setup ‘overall’ was easy and painless. Once connected to the mobile device, the echo integrated almost instantly with my Firestick and allowed us to control both the Echo and the tv.

While the first few questions were the standard ‘silly’ questions expecting unique and entertaining responses from Alexa – it quickly became apparent just how much this device can integrate with our family. My 4 year of daughter took no time asking Echo to sing Itsy Bitsy Spider, for my 2 year old son to get a ‘time out timer’ or for us to play The Beatles on shuffle while eating dinner.

Getting some songs to play did take a bit of ‘perfecting’ how to talk to Alexa. Asking her to play ‘Teddy Bear Picnic’ would present us with ‘An Amazon Original’ instance yet ‘Play Teddy Bear Picnic by Gerry Garcia’ got us the song we were looking for.

One of the biggest things that I really liked but wasn’t expecting – is just how small the footprint of the device really is. At 1.3 inches tall – there has been a time or two we moved the Echo Dot around the house and had to call out to Alexa to locate it! The draw back to this is the same as the benefit – it is possible to easily lose the device if you do not have a specific location where it ‘stays’ – although I do not think many people will have this issue.

The built in speakers are ‘sufficient’ but after connecting the audio out port to a Beats Pill it makes you realize just how mediocre the base speakers really are. Granted the entire price of the Echo Dot is a 1/3 of the Pill and the Echo Dot is not exactly toted as having the best speakers on the market, I can take this one off as a negative.

If you are looking for a ‘fun’ addition to your home and wanting an entry level appliance to see if home automation is for you, I highly recommend the Echo Dot. My kids are entranced and say “Hi Alexa” when they get home, the background music it plays is great for small gatherings or while doing chores, the news feature is a great way to get caught up while having a morning cup of coffee and the integration options for other home automation tools is great.

If you are looking for excellent speakers or video display – I like the Echo line but would recommend the taller Echo or the Echo Show.

If you currently or previously owned an Echo Dot 2nd Generation please leave a comment below and let us know your thoughts!

About Your Digital Mind